The islands east of Bali are called Nusa Tenggara and belong to the ring of fire which stretches from Sumatra to the Maluku islands in the east. The most important destination from a diver´s point of view is the island of Komodo situated in the narrow strait between Sumbawa to the west and Flores to the east. Komodo is one of the oldest national parks in Indonesia. Inside the park borders are the three bigger islands Komodo, Rinca and Padar and also many small cays and submerged reefs. 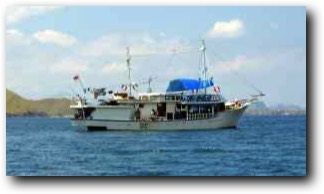 We started our trip in Sape, in East-Sumbawa, from where it is only a short short journey to the dive sites of Komodo. On our way back we followed the northern coast of Sumbawa back to the Gili Islands near Lombok.

There are many other different itineraries to choose from. Some liveaboards leave from Bali and follow the northern coast of Lombok and Sumbawa before they reach Komodo. Most liveaboards however start from Labuan Bajo on Flores. Since the airport of Labuan Bajo has been upgraded this is the fastest way to reach the top dive spots of Komodo. 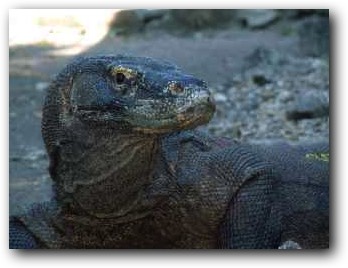 Komodo National Park is one of the oldest national parks in Indonesia. Originally it was founded for the protection of the famous Komodo dragons (Varanus komodoensis) which only live ins this area and in some parts of western Flores.
The protection of this outstanding and fragile eco system is far from perfect. There is a lack of funds and manpower to control the park. In the past there has been destruction in some areas caused by dynamite fishing and also shark finning has been a problem. In spite of these threats there is still much to discover underwater and the Komodo area is rated as one of the best diving areas in the world.

Do you have 12 minutes to watch a video about Komodo? Then just watch the following video about a diving holiday in Labuan Bajo, the gateway to Komodo National Park.
From Labuan Bajo we went on diving trips to Komodo every day. What you then get to see underwater can be seen on the video. 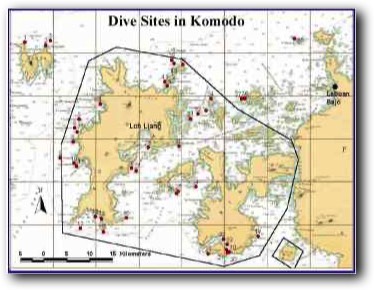 Komodo has the reputation for being a diving area for experienced divers. This is true, especially if you want to dive there on board of a live aboard. There are many dive sites with strong and sometimes unpredictable currents. Also water temperatures change often and are sometimes far below the usual 28° C you will find in most other areas of Indonesia. Especially in the south of the national park temperatures as low as 19° C may occur. It is indeed not a waste of money to buy a 5-mm wetsuit before diving Komodo!

In spite - or maybe because - of these troubles Komodo is offering fantastic underwater experiences for divers. There is nearly a guarantee to see big pelagics (Manta rays, sharks). Also biodiversity in the whole area is outstanding. Critter-lovers und underwater photographers and videographers will for sure find many rewarding motives.

Dive sites in the North

Gili Banta
is situated in the north-western corner of the area, already outside of the national park boarders. We found beautiful coral, many nudibranchs and in the end of the dive a really big nurse shark under a table coral. Water temperatures were far from comfortable (24° C) and visibility was only 25 m.

Batu Bolong
is a rock of which only the top is looking out of the water. A part of the rock is shaped like a ear with a hole in the middle. Bolong means "ear" in the local bugis language.
This dive spot can be dived on the northern or southern side depending on the direction of the always very strong currents here. As long as divers stay in the sheltered area behind the rock this is a safe dive. There are usually big schools of fish and whitetip and grey reef sharks, napoleon wrasses, tunas and rainbow runners pass by. In case you go too far and are caught by the current there will be no more fun. There are whirlpools and really strong down currents will take you away and there will be a safe assent quite a far away from the place your boat anchors!
We liked the northern side with more interesting rock formations better than the southern side.

Pantai Merah
the Read Beach is a popular dive spot, not far away from the ranger station of Loh Liang where all visitors of the national park must register. Visibility is not always good here but is best during falling tide. We saw several rays, huge schools of fish and a lot of different nudibranchs. Visibility could have been better. 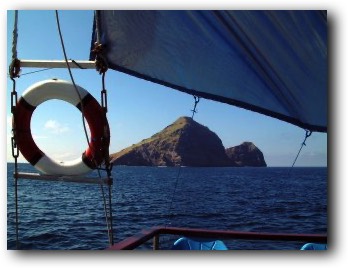 Divesites in the South of Komodo

The Alley
and other dive sites in the south of Komodo are ideal places to watch Manta Rays. Here in the south cold but nutrient-rich upwellings are We saw many Manta Rays, big Groupers and Napoleon wrasses.

Cannibal Rock
is also situated in the South of the national parkl, but already in the south of the neighbouring island of Rinca. The dive site is sheltered inside Horseshoe Bay between Rinca and the island of Nusa Kode. The unterwater-mount is a heaven for critter-lovers. It is totally overgrown by feather stars and soft corals and there are a lot of red and purple sea-apples (Pseudocolochirus violaceus), a special kind of sea-cucumber. We found two frog fish in 30 m.
This is also the place for night dives. There are many basket-stars, bobtail squids and different species of lion fish.
Also the other dive spots in this area can be recommended: Crinoid Canyon, is a wall covered with feather stars and Yellow Wall with overhangs and canyons is also worth a dive. 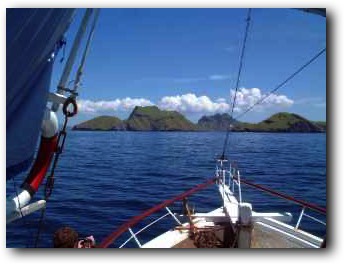 Pillarsteen und Three Sisters
Both dive sites are interesting spots close to the island of Padar between Komodo and Rinca. Pillarsteen has nice canyons and caves and is more sheltered than Three Sisters.
The latter one is a dive site which is formed by 3 (actually 4) under-water mounts, which may be dived all around. There are some exposed sections but if you swim further on you will always find a sheltered place. We saw some sharks, big groupers and napoleon wrasses. The mounts are covered with hard- und soft-corals. We discovered a nice yellow frogfish and a leaf-scorpion fish.

Seboloh Kecil
is already situated outside the national park boundaries close to Labuan Bajo. Here we had very good visibility and dived on an under-water mount covered with hard- and soft corals.

Pulau Sangeang
On the way back to Lombok there are still some very good dive spots on the way. Plan in some time to dive Pulau Sangeang, an impressive volcanic island off the north-eastern tip of Sumbawa. Close to the lighthouse we found on black volcanic sand a lot of critters and there are pigmy seahorses in the gorgonian fans.

My collection of underwater videos from Indonesia can be found on vimeo. The collection is sorted into albums containing only videos of a specific diving area. This is a very good opportunity to have a look at videos from other divers who have been in the area before.

You can see here what other divers have seen in Komodo before.