Diving in Lembeh and Sangihe

In April 2005 I again had the opportunity to dive on board of a simple liveaboard the dive sites of the Lembeh Strait and the Sangihe Islands situated in the north of Sulawesi in Indonesia. Lembeh Strait is not far away from Manado between Lembeh Island and the mainland. It is only a 90-minute-ride by car from Manado to Bitung, the main harbour of Manado where the waiting live aboards can be boarded. Most trips to the Sangihe Islands start and end here. Having done a similar tour six years ago I was curious to find out what had changed.

In spite of rising container traffic due to the new container terminal in Bitung harbour, diving in Lembeh is still rewarding. However prospects for the future are rather dull. Water quality in the shallow strait will likely deteriorate in the future.

Visibility in Lembeh is always a bit worse than elsewhere, which is even enhanced by the black volcanic sand which is found at nearly all dive sites. With visibility around 15 m and uncomfortable temperatures (<26°C) we discovered interesting creatures during every dive.

We found many different species of nudibranchs, pigmy seahorses, dragonets, snake eels and lots of different kinds (including the hairy variant) of frog fish.

At most dive spots we discovered small schools of the Banggai Cardinal fish, a fish which has been brought to Lembeh from the Banggai Islands further south where it is endemic in order to create an easy accessible source of this popular aquarium fish. However, this mouth-breeder seems to push all anemone fish out of their usual habitats in the area. 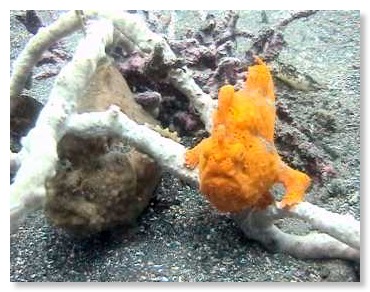 
During a night dive at the house reef of Lembeh Resort we watched Mandarin fish mating at sunset.

A new destination opened in December 2002 is Divers Lodge Lembeh situated on the southern tip of the Island of Lembeh. The small resort is managed by Linda and Rob Sinke and offers diving in small groups following the Froggies example on Bunaken. There is a fixed ratio of one dive guide to every two divers, which makes Divers Lodge Lembeh a top-destination for uw-photographers and -filmers.

The Divers Lodge has only 6 bungalows of different sizes, all facing a beautiful lagoon to the south. The only drawback in July/August is however the constantly blowing south wind which makes relaxing on the veranda of the bungalows nearly impossible. However this is a problem which all dive resorts facing to the south have to deal with in summer.

Due to the position on the southern end of Lembeh Island the very comfortable dive boats (all with WC) have to go past Bitung to reach the main dive spots in Lembeh Strait. This lasts at least half an hour, sometimes more. Usually divers go out for two or three dives and take the very tasty lunch on board. There is Nitrox available also.

My collection of underwater videos from Indonesia can be found on vimeo. The collection is sorted into albums containing only videos of a specific diving area. This is a very good opportunity to have a look at videos from other divers who have been in Lembeh before. 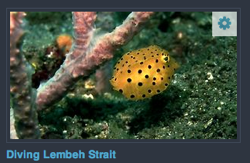 The island of Bangka on the north tip of Sulawesi was our first destination on our way north. There are already two dive resorts on Bangka and some of the Manado based dive centers organize day trips to Bangka. 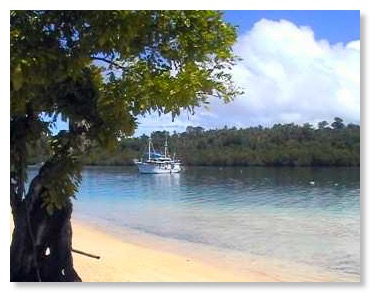 Each of the five dives we made off Bangka was above average. We found an astonishing diversity of soft corals and at some spots dramatic rock formations like the pinnacles at the dive spot Batu Gosoh. Due to currents transporting a lot of plankton visibility was similar to Lembeh. Though we did not find the critters of Lembeh here fish life was very rich.

In the north of Bangka the Indonesian ring of fire continues towards the Philippines. The voyage continues past active volcanoes and during the clear nights near the island of Siau you can see on top of the mountain the lava glow of mount Karangetang. Thanks to the chain of islands on the way north the route is pretty sheltered from the eastern or western winds prevailing in this region. Only during the passages between the islands conditions can get a bit rough. There are many sheltered anchor sites on the way, so usually the nights are very calm. However, if you go straight through from Bangka to the underwater volcano there will be at least one less comfortable night on the way north.

The underwater volcano Mahangetang (sometimes also called Mahengetang) rises out of a depth of 800 m to a height just below the water surface. The active section is actually part of an enormous crater whose sides rise above the water and form small islands in the area, some of them are even inhabited. Before diving there has to be paid a small fee to the local fishermen who argue they cannot fish while there are divers in the water. Well, we found out they were fishing in spite of us diving. It is just their way of profiting at least a bit from the diving tourism.

The dive sites around the underwater volcano - steep slopes and high walls - are impressive, especially because of the huge sponges which grow here to an enormous size. Presumably the minerals from the volcano support this explosive growth of the huge water filters. With good visibility we saw lots of Pyramid Butterfly fish and some Humphead Parrotfish.
Closer to the active part of the volcano the landscape changes dramatically. Between rocks covered by a sufur-yellowish substrate bubbles of gas rise to the top, also the bottom is so hot that there is no more coral growth possible. Also the fish seem to keep away from the area. At least freezy divers can worm up their hands in the volcanic sand.

After a third dive near Pulau Bowondeke further south with good visibility and strong currents we spent a calm night at the foot of mountain Karangetang at the western side of the Island Siau. The next day we had some excellent dives with very good visibility in the area.
Eddy Point, a wall covered with huge sponges and many butterfly fish, and Batu Lehi, an interesting dive ending at an underwater pillar, were very good dives. Also a night dive near our anchor site at Tanjung Lehi was excellent with many big Pleurobranchus and other nudibranchs with Imperator Shrimps in the gills of the nudibranchs.
There are hot springs nearby. Do not miss to warm up in the hot water after a dive in the chilly water! 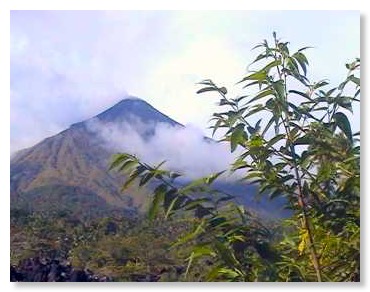 Also the dive sites of the following days at Pulau Ruang (New Lava Flow) and Pulau Biaro (Bomb Rock) were interesting. Bomb Rock proved to be a tricky dive site with strong and changing currents, even with strong down currents at one section of the dive.

Has there been a noticeable change in the last six years? Actually not much. Coral- and fish life is still healthy. Interesting enough biodiversity increases from north to south. We experienced that visibility is getting better when you go north but this does not mean that biodiversity is getting better. There can be no doubt that the region formed by the northern tip of Sulawesi with the Bunaken National Park, Bangka and Lembeh Strait is one of the world´s hottest spots of underwater biodiversity.

Like six years ago big pelagics were very rare indeed. We saw very few mid-sized Napoleons, King Mackerels and Dogtooth-Tuna. Sharks were also very rare. There are occasional sightings of huge Oceanic Hammerheads near the underwater volcano but we were not lucky to see them. Indeed nowadays the chances of seeing big fish in the Bunaken National Park are probably higher than to see them on a trip to the Sangihe Islands.

Our live aboard near Siau Island

A trip to the Sangihe Islands is certainly worth the effort. Last but not least it is a beautiful chain of islands the voyage is passing by. Palm frinched beaches, high volcanic mountains and the beautiful blue water form a picturesque background. Rewarding is also a visit of some of the islands. There are coconut and clove trees everywhere and also a lot of nutmeg is harvested from nutmeg trees here. Everywhere on the roads they lay on the ground for drying in the sun and their unmistakable smell is in the air.