The Togean Islands are situated in Indonesia in the Gulf of Tomini, which separates Central-Sulawesi from North-Sulawesi. The archipelago consists of many small islands, most of them covered with dense jungle. An active volcano, Una Una, also belongs to this stretch of islands. The dark green of the islands and the crystal clear water is a perfect setting and has attracted many travelers during the past years. Quite a number of homestays and bungalows on the islands offer basic facilities for the foreigners.

During the rainy season there is a high risk of malaria tropica on these islands. 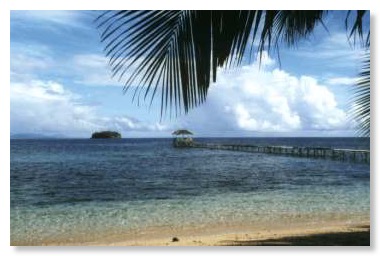 Travelers coming from the South follow the Trans Sulawesi Highway to Poso and from there to Ampana. In May 2000 riots and killings started in the Poso region. During this time visitors traveled through burnt down villages, in which only the mosques and houses of muslim inhabitants had remained intact. In other districts only the churches and christian houses were still standing, everything else had been burnt. In August 2000 the situation calmed down, but already in June 2001 the fighting broke out again. On August 8th, 2002 an Italian tourist was killed when a public bus coming from Rantepao was attacked by gunmen near Poso. On October 21st, 2002 - only a few days after the Bali bombings - a spokesman of the fundamentalist militia group Laskar Jihad announced their withdrawal from the Poso region. All 200 (?) members of the terror group were supposed to leave the area until the end of November. So there may be a chance for peace in the area now. A very detailed analysis of the Poso crisis may be found on the Human Rights Watch homepage.

There is a regular bus between Palu and Ampana. However you will have to find out if it is really running.

I really recommend to check already in Makassar the security situation in the area.

An alternative, more secure route leads from Makassar via Palu to Luwuk by plane. From there you can reach Ampana by bus or chartered car in about 5 h.

The crossing by public ferry from Ampana to the Togean Islands takes between 4 and 6 h depending on your destination on the islands.

From the North you will have to pass through Gorontalo. From there you can cross Tomini Bay with the regular ferry to Pagimana and continue your trip to Ampana. There is also a new twice weekly ferry from Gorontalo to Wakai (Togeans). In Marissa near Gorontalo it is also possible to cross by chartered boat in about 5 hs.

On Kadidiri Island two resorts share the beach. We were satisfied with our bungalow at Kadidiri Paradise. The better bungalows are directly near the beach. During our visit in summer 2002 there was a lot of upgrading going on. All bungalows have toilets and mandi. Meals were excellent.
To the resort also belongs Taipi Cottages on Pulau Taipi, a small island in front of Kadidiri. This is the ideal place for people who want to be on their own. 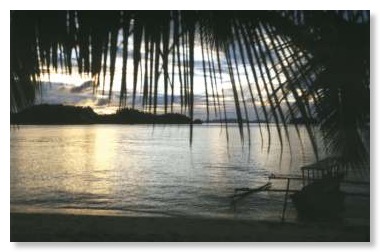 We enjoyed the dives around Kadidiri very much. Especially because water temperatures around 28° C were much more comfortable than in the South of Sulawesi. Gonzaque and Paul, the two padi divemasters had a clean dive shop with old but regularly checked dive gear and they knew the area very well. Gonzague lived there for many years and discovered together with Paul most of the best dive sites in the area including the wreck of the B-24-Bomber.
In the meantime both dive guides have left the Togean Islands and the dive guides at Kadidiri keep on changing all the time. So you better check first before deciding with which of the two resorts you want to go diving.

Most dive sites are in easy reach and are situated at Taipi or Kota Reef in the north of Kadidiri. It takes about one hour to reach the B-24 wreck. Una Una, the active vulcano, is a destination for a full day-trip.

On Mai 3rd, 1945 this four engine plane was on the way back from Ujung Pandang. After an attack by Japanese planes it had to go down on the Togean islands. The pilot still had time to inform his base on Morotai Island before he brought the plane down in a perfect water landing. A short time later the crew was rescued by a water plane. 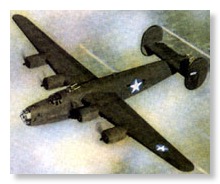 The wreck lies on muddy ground not far away from a mangrove forest, so visibility is not excellent. However with a group of good buoyanced divers this is one of the best dives you can do in the area. The wreck is covered with soft coral and hosts many shrimps, nudibranchs, lots of lion fish and also a huge school of jackfish.

The Gap
A Coral Slope with a good variety of coral and many school of fish. This is often a drift dive. You may see eagle rays, tunas and barracudas.

The Crack
You swim across the Mini Canyon - also a dive site on its own - to a large rock which is split in the middle. The dive continues through the rock and ends in 51 m. This is a good place to watch sharks in the deep. This is no dive for beginners.

Dominique Rock
The dive leads between rocks in front of Taipi wall to the huge Dominique Rock. Under an overhang in about 40 m you usually meet a school of big jacks. The top of the rock is covered with whip coral and gorgonian fans. Also a rather deep dive for experienced divers.

Labyrinth
A labyrinth of rocks on a sandy bottom provides a beautiful underwater scenery. The dive ends on a coral garden. This is an easy dive.